Recently Bollywood actor Amitabh Bachchan tested positive for covid-19 along with his son abhishek bechchan,daughter in law Aishwarya rai and granddaughter aradhya,Amitabh Bachchan and his son rushed to nearby hospital and was admitted there,Aishwarya Rai Bachchan and daughter Aradhya were kept at home isolation, where they were getting treatments. Let us find out which shocking news has come forward about the health condition of Aishwarya and Aradhya.

Soon after, Abhishek and Aishwarya’s 8-year-old daughter Aradhya got tested and her reports also came positive. Aradhya was also at home isolation with her mother and they were getting the primary treatments at their home. Aishwarya and Aradhya were under home isolation at the Jalsa, which is the residence of Bachchan’s. The Jalsa is now sealed by the Brihanmumbai Municipal Corporation after the sanitization. The BMC has also sanitized other residences of the Bachchan’s. Well, as per the current reports, Aishwarya Rai and Aradhya are moved to the Nanavati Hospital from their home isolation. As per the sources, though their health condition was improving during the initial days, after a few days, their condition stopped responding. When Aishwarya and Aradhya’s health started deteriorating, the doctors advised the Bachchan family to shift the mother and daughter duo to the hospital they was admitted to the Nanavati hospital on Friday, 17th July, almost after 7 days of home isolation. The hospital authorities have informed that doctors are a little worried about Aradhya’s condition as she is too young. Aishwarya and Aradhya are taken to the hospital so that they can be given proper treatment. As per the last reports, Amitabh Bachchan and Abhishek Bachchan’s health condition is stable now.Amitabh, Abhishek, Aishwarya, and Aradhya have to stay at the hospital until the next order of the doctors.Hope they getwell soon. 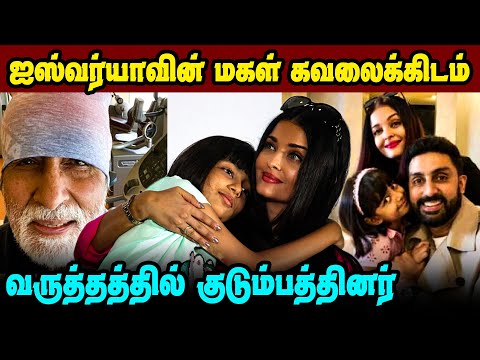